Tiamat was the 5th ranked Dragon Lord. She was the primary antagonist of the Assault on Balaurea (2.0) and Ascension (3.0) updates of the game, and was the first Dragon Lord to be fought and brought down by the players.

Tiamat was the last of the Dragon Lords to ascend, and as a result had the strongest desire for power. She killed the original 5th Dragon Lord Apsu when she was ascended to his personal bodyguard, taking his place. She wanted to prove herself, because only Fregion accepted her without doubts. While Meslamtaeda enjoys battle for its own sake, Tiamat enjoyed combat for what it could bring her. She was driven by hatred for the twelve Empyrean Lords and the Daevas, and always led the charge against Aion. Tiamat disliked sapiens, and would rather destroy them all than enslave them, unlike Ereshkigal.

In-game, Tiamat first appears as a human woman who resembles an Asmodian at the start of 3.0, and then as a large dragon with a long white mane and a shrill roar

Much of Tiamat's backstory is detailed in the book The Sixth Dragon.

In the original campaign some of her troops work with the Krall and Mau tribes living in Elysea and Asmodae to open Abyss Gates into these regions and allow the Balaur access. Learning from the failures, two of her legions are later dispatched and successfully invade Heiron and Beluslan, establishing a Balic foothold in the previously safe world of Daevas.

Still driven by her desire for power, her troops later steal Siel's Relics from its Reian Protector. This act causes the Dark Poeta incident. One of Marchutan's visions reveal that her subordinates will conquer Poeta, and that the Elyos may fall in the future which would mean a Balaur victory overall. Asmodae cannot avoid sharing the same fate if this happens.

Marchutan decides to stop Tiamat, and thus the hunt for Siel's Relics begins (2.0). The Dredgion transporting the relics to Tiamat malfunctions and crashes in Gelkmaros, where a traitor among the Balaur (Kumbanda) seizes his chance and runs off with the relics before either faction can claim them. After a deadly race across Gelkmaros and into Silentera Canyon, the Balaur traitor is finally cornered in the Beshmundir Temple. Although the players manage to temporarily neutralize the relics, Tiamat's forces appear and manage to escape with the relics and the traitor.

Lephar appears before Tiamat, who instantly identifies the visitor as Empyrean Lord Israphel. Israphel provokes Tiamat, who tells him to "watch and understand" as she easily defeats Daevas invading Tiamaranta.

Fueled by the immense power contained in Siel's Relics, Tiamat almost completely annihilates the Elyos and Asmodian Expeditionary Forces. After the remainders force a temporary truce the Reian-Elyos-Asmodian alliance is born, which eventually manages to eventually drive Tiamat into a corner. When Reian Sorcerers find a way into her hideout she invites Kahrun to a peace conference, which turns out to be a trap. Kahrun is sent to the past and the player is left to face her alone.

Even in the maw of death, the player refuses to defer to the Dragon Lord and is thus saved by Empyrean Lord Marchutan/Kaisinel moments before he/she is destroyed. Using the power granted to him/her by the Reian Protector Oriata, the player manages to neutralizes the relics. With the relics disabled, Tiamat is greatly weakened and becomes no match for a Lord at full combat strength. She dies holding on to her grudge against the Daevas. Celebrations commence across Sarpan and Tiamaranta as the Reians reclaim the lands that were originally theirs.

After Tiamat's death, remnants of the Tiamat Army are seen being hunted down and destroyed by Beritra's legions in Katalam and Danaria. It is also revealed that her death was brought about by <Beritra> intercepting her messenger and willingly leaving her to die. At this point Beritra is shown to be aware of Tiamat's 'dark secret'. Through the messenger Beritra also learns that Tiamat was aware of presence of a <Hyperion> in the Infinity Shard, and seizes the machine for himself.

Tiamat's role is further expanded with the Upheaval (4.8), where it is learned that Fregion had assigned Tiamat to be the warden over a defeated <Ereshkigal>. Knowing the price of failure, Tiamat created several warding stones to hide the prison in which the 3rd Dragon Lord was sealed and assigned several of her undead minions to guarding them. Finally, as an ultimate precaution, she submerged the land of Cygnea/Enshar altogether and hid the stones keeping it in this state across her territories: Sarpan, Tiamaranta and Katalam. 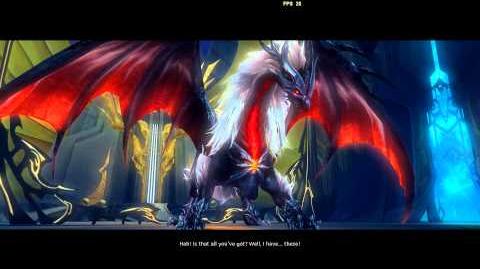