Targeting is an important part of gameplay in Aion. Understanding what information appears, and how to best use it in attacking a target can make the difference between success and failure. To select a target, either click on the NPC or use <Tab> to scroll through nearby NPCs.

The Target Status Bar appears at the top of the User Interface when a target is selected. The red center bar is a representation of the target's health. The small circle on the left indicates red for aggressive or hostile, brown for non-aggressive and various white emblems for NPCs that are friendly. With the exception of the opposing faction, the level will be displayed next to the circle emblem. As well, during combat, the skills being used by the target will appear below the bar, along with buffs and debuffs.

NPCs can be classified into four different Ratings. The status bar changes depending on its rating. The group sizes listed below are based on targets within level range of the character.

In the small circle of the Target Frame is an emblem. For NPCs, the number of dots represents increasing difficulty, and red are aggressive, brown are passive until attacked.

Using the Compass for Targeting Edit 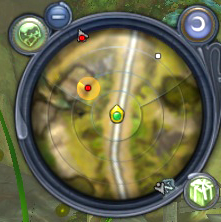 By selecting nearby mobs, and checking each one's aggro range, it is possible to see if one mob is within the other's range. Not all mobs have the same aggro range in a given spot, and checking could prevent multiple mobs attacking at the same time.

Retrieved from "https://aion.fandom.com/wiki/Targeting?oldid=77274"
Community content is available under CC-BY-SA unless otherwise noted.