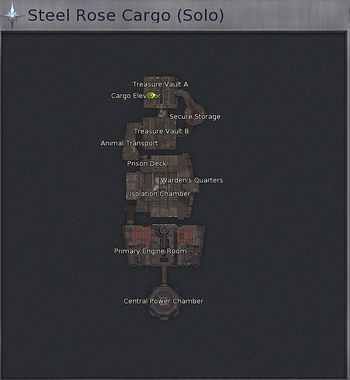 Steel Rose Cargo is an instance for level 61+ players, and can be played either solo or group (of up to 3). There are no prerequisites to get inside. Entrance is gained via Yukarunerk who is Pandarunerk’s Port in Danaria. The cool-down timer is 70 hours. It is possible to find a group for this instance when speaking to Yukarunerk using the find group dialogue option. The solo version has level 63 normal mobs, the group version has level 64 elite mobs.

This instance has the same floor plan as the Steel Rake group instance. Most of the mobs are not social, and most are single pulls, making this instance relatively straight forward to progress through. All the mobs are level 63, and only the last boss is a elite mob. It is relatively fast to only kill to get through the instance, but clearing the areas can be done to get more XP, drops and Kinah. If you die inside the instance, the option will appear to rez at the entrance.

After entering, the first area is Treasure Vault A. There are a few patrols, but they will not be an issue. Proceed to the center of the room, killing to get to <Hold Overseer Nanukin>, who has the

<Secure Storage Key>. Continue through the next area, Secure Storage, which is all single pulls, to Treasure Vault B. This has a series of single pulls which are easy. <Twin Blade Lizakiki> patrols in a circle, so pull him when he is close and away from other mobs. Then kill <Twin Blade Monakiki> to get the

<Breeding Farm Key>. Go up the stairs at the end of the room to get to the Animal Transport.

Continue through Animal Transport, to the Prison Deck. Continue to kill to work towards the far side. Along the way, the Warden's Quarters has <Warden Likarkin>, who holds the

<Primary Engine Room Key>. To get the key for the Isolation Chamber, it is necessary to kill <Lewisininerk>, who can spawn in one of the three small prison rooms to the south of the chamber.

Next, work over to the entrance to the Primary Engine Room, which is down a ramp to the southwest. It will be necessary to work through the main part of the Engine Room to the farthest side to get to Madtwister Bosaraki, who holds the

The last boss, <Maintenance Chief Notakiki> is an elite mob, and the only real challenge in this instance. He does primarily melee attacks, so keeping a distance attack is effective. Kill him, and hopefully get a good drop!

This section is not complete. You can help by adding to it.

Retrieved from "https://aion.fandom.com/wiki/Steel_Rose_Cargo?oldid=103664"
Community content is available under CC-BY-SA unless otherwise noted.