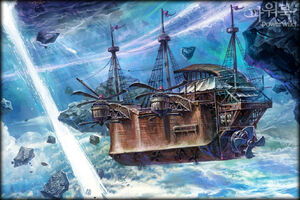 Steel Rake or "SR" was a set of instances available to players of level 40 and above. Players could enter the Steel Rake Cabin version (Solo) and the Steel Rake version (Group), both set in different parts of the ship.

In the group version, players will need to clear the lower decks in order to gain access to the upper decks.

The ship itself is named after the captain's, <Brass-Eye Grogget>, who has a steel hook for one of his hands. The ship used by him and his band of Shulack racketeers, the Steel Beard Pirates, to sail through the Abyss, but is currently anchored somewhere to undergo repairs. The Black Cloud Traders seize this opportunity to sneak the player on board.

In order to introduce the Steel Rake instances, players may complete quests to understand its backstory.

There are two separate areas to Steel Rake, accessed by different Shugos.

Retrieved from "https://aion.fandom.com/wiki/Steel_Rake?oldid=103663"
Community content is available under CC-BY-SA unless otherwise noted.