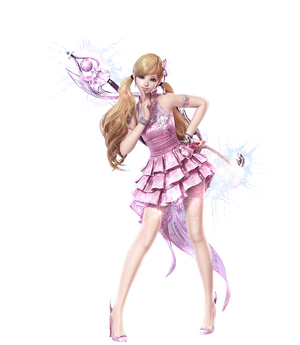 "Here's a note you wont forget."

Songweavers are magical casters that use musical abilities at their disposal to supplement many roles in the game. Their musical notes and spells have the potential to wreck an enemy, or to soothe and boost an ally.

This class is governed by the Empyrean Lady Siel.

For centuries after The Cataclysm, Muses fell silent from heartbreak over the loss of their patron, Lady Siel. That did not mean, however, that they ceased their studies. Realizing that combining music with the power of Aether could produce a dazzling effect, some Muses decided that the best tribute to Siel would be to use their power in service to their people. Inspiring their allies and weakening their enemies, they made such a contribution in battle that the Kaisinel Academy and the Marchutan Priory confirmed them as an official class.

The Songweaver is a versatile magical class, as they posses a number of CC skills, decent support heals and an array of destructive musical spells and abilities. Some of their music has the ability to boost certain attributes in the party too, although in a different manner from the Chanters. In Aion, they fill in the role of a magic DPS, with a tinge of a supportive element like the Chanter and Spiritmaster.

Songweavers' primary damage comes from executing their musical notes in chains. Their DPS will only be able to reach its fullest potential when they execute their chained skills in succession. Do note that because they rely a lot on skill chains, only the initial ability has a cast time; the subsequent chained abilities are all cast instantly in succession, without much delay. This allows a Songweaver to deal heavy damage in a short amount of time.

In the late game, Songweavers can either be an effective all-rounded support, or be a nasty DPS machine with some CC potential, all depending on their Greater stigma choices. Other than chaining skills, they have a small number of separate high damaging skills as well, further augmenting their formidable DPS. Songweavers are also well known for their powerful MP-draining skills.

Songweavers are also unique supports as they are the only class that is able to heal MP. This is another attractive feature as they significantly reduce the downtime of group members in instances, relieving them of some of their mana issues as well. They are also able to play music that heals allies, though they might not be as strong as that of the Cleric or the Chanter. In this aspect also, they can also aid the Cleric with support healing or even debuffing status ailments on group members in times of an emergency, if required

In addition to DPS/support, they possess a debuffing ability, like the Spiritmaster. They also make good CC'ers. They have CC skills which works identically with the Sorcerer's own arsenal of CC skills.

Songweavers are swift spellcasters, being able to deal massive amounts of damage quickly if allowed to. However, many of their skills have slow animations, so many songweavers will seek to find equipment that will boost their attack speed instead of equipment that reduce cast times.

A songweaver can perform fairly well in solo PVP. If socketed with

<Freestyle I>, they can bring enemies to sleep, from which they can strike the enemy with delayed spells and debuffing spells that do not wake enemies from their sleep. So by the time the enemy wakes up, he would have suffered a moderate amount of damage. Many of the Songweaver chained abilities can often be cast while moving, making them excellent kiters as well. Even when an Assassin sneaks up on them, Songweavers are equipped with abilities that can protect and distance themselves from them. Abilities like

<Dance Off>, which immediately causes any six enemies to fall asleep within melee range, and protective shields and buffs such as

<Protective Ode I> and Mvt. 4: Winter that help mitigate some physical damage, are some examples. If played well, Songweavers are very effective against plate classes, Spiritmasters (Because of a buff Songweavers have that increases Fear resistance) and even Assassins. Sorcerers however, may prove to be a challenge as they are more resistant to the damaging abilities from Songweavers, and can pretty much do many things that a Songweaver can do. Songweavers also possess mana-draining abilities can also prove to be a nuisance for Clerics and classes with low MP pools, such as Templar and Gladiators.

In group PVP, Songweavers are often secondary targets, targeted when the Cleric and Chanter/Spiritmaster are down. Songweavers are decent CCers with their sleep abilities and a silencing ability, in which they can use on the enemy low-priority targets or even the Cleric. They also help contribute in bringing down the high-priority targets with their swift and powerful musical spells. Equipped with healing abilities for both HP and MP, a Songweaver may be required to do support healing as well as maintaining the team's MP pool, should the needs arise. Because Songweavers wear cloth armor, they can still die quickly if focused on without their defensive shields and healing support from another healing class on them.

Equipped with strong magical abilities and a healing ability later on, Songweavers are effective solo classes. However, like the Chanter, they are not well-equipped with AOE skills, so if not played carefully, taking down a group of mobs may prove to be a daunting task. Being cloth armor users, they are also more prone to physical damage and have lesser HP pool in general, hence they need to be carefully played when fighting alone against elite mobs. Their chained healing ability is good enough to sustain them during normal combat, but often not powerful enough against damage mitigation from elite or boss mobs. They will therefore find themselves constantly casting healing melodies to mitigate damage rather than dealing damage to the mob, significantly reducing their DPS. With that said however, Songweavers have a number of chained abilities that can be used while moving, hence they can try to constantly distance themselves from tougher mobs.

Our community needs more information on this page! Can you help out? Click here to add more.

This section is not complete. You can help by adding to it.

Retrieved from "https://aion.fandom.com/wiki/Songweaver?oldid=100027"
Community content is available under CC-BY-SA unless otherwise noted.