Siel, known as the Lady of Time, is one of the Empyrean Lords who died during the Cataclysm.

She was noble and pure, and symbolized by time, and the direction East. She believed that guarding the Tower was her entire reason for being, and her devotion and noble spirit made her an ideal guardian.

Her appearance was revealed in the Aion 5.0 trailer.

When her fellow guardian Israphel called for peace with the Balaur toward the end of the Millennium War, she allowed herself to be talked into it in spite of her misgivings.

When the fighting broke out inside the Tower, Siel realized her fatal mistake and couldn't bear the shame. After the Archdaeva had expanded all of his life energy to restore the aetheric field surrounded the tower, Siel appeared and sealed the remainders of his powers away inside the tower, hoping that one day his future reincarnation would appear to once again protect the tower. She created the Fissure of Oblivion and its guardians to prevent the Archdaeva's memories from falling into the hands of the unworthy. In her final act she sacrificed herself to freeze the Tower of Eternity and the lands surrounding it in stasis, seeing as the restored tower would just instantly fracture again under the onslaught of the Cataclysm. Through Siel's sacrifice the aetheric field was stabilized, and life would be able to flourish once again in the regions that later came to be known as Elysea and Asmodae.

Her ghost appears when Isprahel activates her relics at the end of Aion 3.0, and reveals that everything that has happened so far is in accordance to Aion's will. She beckons Israphel to join her, and the area is enveloped in a blinding light moments after. Afterwards Israphel and her relics are nowhere to be seen or found, and are presumably destroyed.

She and Israphel are the most famous Daevas to have been displaced. 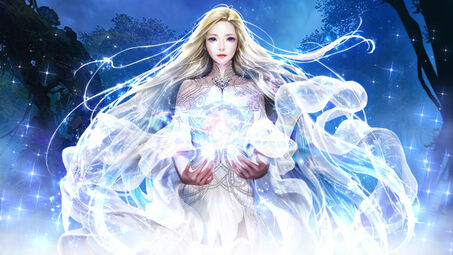 Retrieved from "https://aion.fandom.com/wiki/Siel?oldid=99933"
Community content is available under CC-BY-SA unless otherwise noted.