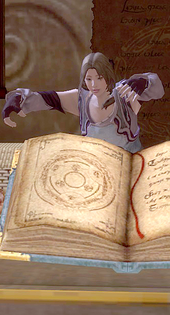 Servillia is a medicine merchant at Elyos Square in Sanctum. She is arrogant to Humans but kind to Daevas. The daughter of Daeva parents, she was treated like a princess as a child but failed to ascend.

"Affinity with magic? Potent aura?
Want more ways to tap that power?
On my shelves are many weapons for workers of magic."

Retrieved from "https://aion.fandom.com/wiki/Servillia?oldid=66732"
Community content is available under CC-BY-SA unless otherwise noted.