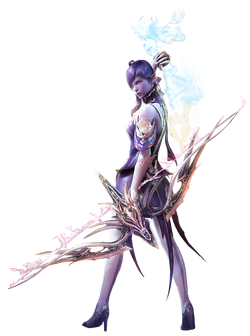 "Chase me or run away. Either way, you'll only die tired."

The Ranger class is the ranged weapon expert of Aion and deals extensive damage from afar by using their bow to launch deadly arrows to destroy their victim. The Ranger is a ranged dps class with one or two skills of CC ability.

The Ranger excels at long range burst type dps and is exclusively considered a dps class. While Rangers do have a variety of skills that provide debuffs and snares on a target, the main focus of the class is to inflict high damage very quickly from afar. To aid in this focus, Rangers also have a variety of survival skills and traps that can keep enemies at bay and allow for the Ranger to quickly put distance between them and their target. Once at optimal distance, the Rangers then burst their target down quickly and efficiently. While Rangers do have the ability to use melee weapons such as a dagger or sword (and have minimal skills to match), their main power comes from the use of a bow, because a Ranger can keep a target snared indefinitely and also has a chance to stun a target on each critical bow attack.

In solo play, the Ranger can kite any target while still maintaining a high rate of dps. Since mobs are kited and do not actually get into melee range, a good Ranger will almost never get hit by an enemy mob. Not only does this allow Rangers to kill mobs non-stop very quickly, it also allows for Rangers to solo kill elite mobs, which provide much more experience than normal mobs.

In group play, Rangers make a good addition to the party because they can provide good long range dps, can provide minimal CC with the use of their traps or

<Sleep Arrow I>, and interrupt enemy skills by silencing enemies with their

<Silence Arrow I>. Rangers also get a basic

<Hide I> skill as well as stealth detection skills (

<All-Seeing Eye I>) to scout ahead and point out any hidden mobs for their group.

In solo PvP, Rangers can take down other players very quickly since they can get the element of surprise with the use of their hide skill. Their buff skills also allow them to increase both their evasion and accuracy to deal with higher level players with more ease. Should things turn sour for a Ranger, traps can be laid down or

<Tactical Retreat I>} can be used to run and hide into safety. Another thing to note is that Rangers also get a buff skill (

<Mau Form I>) which increases attack speed, movement speed, and damage significantly. All of these advantages, combined with the ranger's high burst dps, allow for Rangers to quickly dispatch a target then retreat into safety.

In group PvP, Rangers usually target the back line of the enemy group. With their far range and quick, high damage skills, Rangers can burst down targets that are unprepared very quickly. Also, with a high Crit Rate, a Ranger can keep a caster locked down by continuously stunning their target, ensuring that the target cannot cast any skills or even move at all. However, it should be noted that Rangers have one of the lowest HP pools and do not have much in the way of direct damage mitigation. As such, if snared, stunned, or otherwise immobilized by an enemy, Rangers can be killed very quickly.

In summary, Rangers require a high degree of skill level to play effectively. Mastering techniques such as the "jump shot" and learning how to perfectly position yourself can mean the difference between achieving a flawless kill, or getting snared and dispatched by an enemy. Excellent situational awareness and on-the-fly thinking are what makes or breaks this class in PvP scenarios.

In most scenarios, be it PvE or PvP, most rangers exclusively focus on maximizing their attack. This is done by armsfusing their bow and enchanting it to a high level as soon as possible. While rangers do require a few manastones to hit the soft cap for critical rate, the rest of the slots are devoted to raising attack. Excellent armor is beneficial but not absolutely necessary to excel with this class. However, it is imperative that all rangers acquire armor that boosts both their movement speed on the ground and flight speed in the air to ensure that they can stay at optimal range from their target while bursting it down.

After 1.9 and the introduction of Strike Resist, it has become less important to optimize attack. Rangers now have to boost their crit stat to between 500 and 600 (including food and scrolls) to overcome strike resist stats against opponents with enchanted armor. After meeting that crit range, socketing HP instead of attack is preferred. A 10k health glass-cannon is worth more than a 3k health glass cannon. With a larger health pool, you can take down more targets, and with potions and recovery stones you are able to handle a vast majority of the other classes. Armor and weapon choices should prioritize manastone sockets over minimal statistic changes. In the end, manastone sockets are much more beneficial.