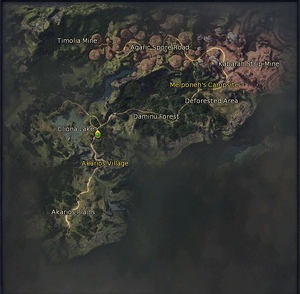 Poeta is an island off the main continent of Elysea, and is the starting area for Elyos characters levels 1 through 10. The lush green land is filled with wildlife and plants, although recent activities from the local sapiens have been threatening the idyllic atmosphere.

In order to keep the wildlife in check, the villagers have hired a band of mercenaries led by Captain <Kalio>. The player is introduced as a human mercenary belonging to this unit and has to work with others in the region to restore order.

An instance version of this map, Dark Poeta, is available prior to the 6.0 update. This is an alternate future version of Poeta set in a timeline where the Balaur managed to enter the region through the Abyss Gate found in the back of Timolia Mine.

*Note: Teleport and Flight Transporter prices are an approximate 100% value and may fluctuate based on your servers' Influence Ratio.

- The region received a graphical overhaul during the 5.6 update, bringing its appearance up to modern day standards. In the 6.0 update it received additional graphical and environmental changes.