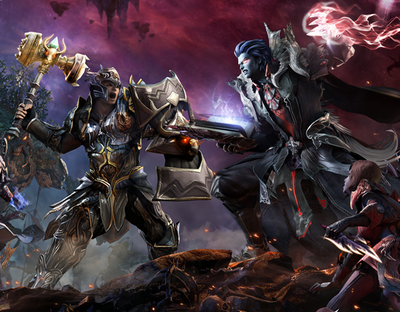 Player vs. Player (commonly abbreviated PvP) denotes combat between players of any kind, such as:

In Aion, PvP and PvE (Player vs. Environment) are combined into a PvPvE scenario, where a player may fight both the opposing player faction and the AI controlled faction.

Players can PvP in Aion as early as level 1, by right-clicking a fellow player and selecting "request a duel". At level 10 players will gain access to the Coliseum in Sanctum (

Asmodian), which are contested areas where players will be able to freely fight each other without asking.

Between levels 41 and 75 players can use rifts to travel the opposing faction's land (such as Inggison and Gelkmaros).

The bulk of the PvP content will be unlocked upon reaching level 76. Players will move to Lakrum (shared endgame map), access to PvP instances such as the Arenas or Battlegrounds will be unlocked, and players can partake in Sieges, such as Divine Fortress Siege.

Retrieved from "https://aion.fandom.com/wiki/Player_vs._Player?oldid=103705"
Community content is available under CC-BY-SA unless otherwise noted.