Pernon is the housing district for Asmodian players. Located south of Pandaemonium, the Shedim Lords offer houses for Asmodian Daevas here. Characters of level 21 and above are eligible for a free studio. Additional and better facilities can be purchased with kinah via a weekly housing auction.

Like Oriel, Pernon has seasons that affect the scenery and weather in the area, making it a unique area within Asmodae.

Upon visiting Pernon players will arrive at the Pernon Plaza, the central area where all activities related to housing take place. Besides the furniture and housing auction NPCs the plaza also features a mount merchant, and a teleportal leading to several areas of Balaurea. In the past it also featured an extensive production district with workshops for all crafting professions in the game, but these workshops in the 6.0 update following the removal of the old crafting system.

From Pernon Plaza players can traverse one of the four outgoing roads or use the short-range teleporter to access the various districts Oriel has to offer:

Pernon features a number of recurring events that players can partake in at select times:

Housing auction: Between Monday and Sunday players can visit the House Auctioneer in Pernon Plaza to see what houses are up for auction for the week. A bid can be (re)submitted at any moment during these days. On Sunday the auction for that week will end and the houses will be distributed to their respective highest bidders.

Seasonal Agrints: At the start of each in-game season (Spring/Summer/Autumn/Winter) a Seasonal Agrint will spawn in one of four per-determined spots in Pernon. The type of agrint that will spawn, as well as its location, depends on the season of the moment (1st of March, June, September, December at 00:00 AM in-game time). Players can defeat it to earn

<Life Leaf> (used in the creation of mounts) and unique housing decorations in addition to other rewards.

Shugo Nomads: Traveling Shugo nomads will appear in set locations in Pernon between the 15-17th of each in-game month (with the exception of January, April, July and October). During this time they will sell selling and offer quests for a rotating variety of items, including rare/exclusive housing furniture pieces and costumes. They also sell several general goods at a lower price compared to the regular NPCs. 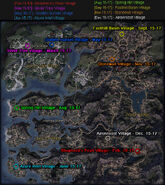