Oriel is the housing district of Elysea. It is located underneath Sanctum and offers various means of accommodation to Elyos Daevas of level 21 and above.

Similar to Pernon, Oriel has seasons that affect the weather and scenery in the area, making it a unique region within Elysea.

As Sanctum's population, and with it the city's role as the center of Elyos economic, military and administrative activity was steadily increasing, a number of problems began to arise. Transportation in and out of the city was becoming increasingly difficult, and the available areas for accommodation within the city itself was limited as Sanctum was an island floating in the sky. Eventually suburbs began to form on the land underneath the floating metropolis.

By the time of Aion 3.0 these suburbs had grown into numerous smaller villages. Sanctum then acknowledged the area and invested into further refurbishing it, organizing the villages into states and providing additional means of accommodation and services. At this point the region became known as Elysea's housing province and received a new name: Oriel.

Upon visiting Oriel players will arrive at the Oriel Plaza, the central area where all activities related to housing take place. Besides the furniture and housing auction NPCs the plaza also features an a mount merchant and a teleportal leading to several areas of Balaurea.

From Oriel Plaza, players can cross one of the four bridges or use the short-range teleportal device to access the region's various districts:

Oriel features a number of recurring events that players can partake in at select times:

Housing Auction: Every week, between Monday and Sunday, players can visit the House Auctioneer (E) in Oriel Plaza to see what houses are up for auction for the week. A bid can be (re)-submitted at any moment during these days. On Sunday the auction for that week will end at a set time, although this deadline can be extended in case last- minute bids are made (up to 6 extensions of 5 minutes each = 30 minutes). After the auction has concluded the houses will be distributed to their respective highest bidders, and the seller will receive their share of the profit.

Seasonal Agrints: At the start of each in-game season (Spring/Summer/Autumn/Winter) a Seasonal Agrint will spawn in one of four per-determined spots in Oriel. The type of agrint that will spawn, as well as its location, depends on the season of the moment (1st of March, June, September, December at 00:00 AM in-game time). Players can defeat it to earn unique housing decorations in addition to other rewards.

Shugo Nomads: Traveling Shugo nomads will appear in set locations in Oriel between the 15-17th of each in-game month (with the exception of January, April, July and October). During this time they will sell and offer quests for a rotating variety of items, including some pieces of rare housing furniture and costumes. They also sell several general goods at a lower price compared to the regular vendor NPCs. 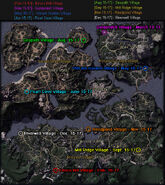 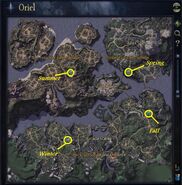