Mounts are a form of travel introduced in Aion Ascension. Mobility is key on the battlefield. Thus, Atreia's most skilled scientists have researched a variety of technological breakthroughs to provide us with the latest in battlefield mobility. These mounts and vehicles will allow Daevas to travel faster than ever! All mounts have flight capabilities, and most have the ability to temporarily boost their speed beyond normal measures.

Mounts have the following effects

All Altered State skills that affect movement speed also dismount you 100% of the time.

If a capture skill decreases movement speed, it will always dismount the target.

A capture skill that drags the target but does not decrease movement speed has a certain chance to dismount.

Take a Mount for a Test-Drive![edit | edit source]

Some of the high-performance mounts can be very hard to come by. Even those that can be bought from NPC vendors can cost a fortune. If you complete one of the following quests, you can use a mount for an hour free! 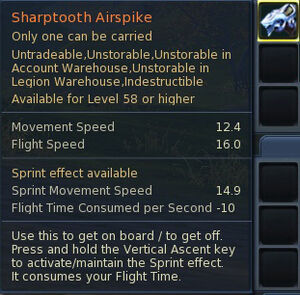 Each mount has a fixed movement speed Buffs, Running Scrolls, Flight Scrolls, and Speed Shoes are not needed to make these mounts really go!

A mount increases your movement and flight speed while you are riding it.

Each mount increases movement and flight speed by different amounts. Rare and expensive mounts give the biggest boosts. Mounts are very useful when for getting to remote places. However, you cannot use skills or items while riding them, so be sure to consider that before deciding where and when to use them.

The performance stats of a mount are all shown in its item tooltip.

When you get on a mount, you will feel the speed boost right away.

How to Use[edit | edit source]

Mounts are stored in your cube as items. Click one, and your character will spend about 1 second summoning the mount, and then get on it.

To get off the mount, open your cube and click the icon again.

This screenshot shows a mount Sprinting. Focusing lines appear on the screen as the movement speed increases. To start Sprinting, get on a mount and press the <W> key (Forward) twice in quick succession, or press the <R> key (Ascend/Sprint) once. Sprinting provides a huge temporary boost to movement speed by consuming flight time.

Try Sprinting up a hill and then leaping off for a huge running jump.

Retrieved from "https://aion.fandom.com/wiki/Mount?oldid=103416"
Community content is available under CC-BY-SA unless otherwise noted.