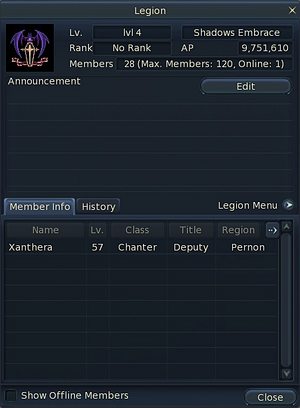 Legions represents players who band together to fight against the opposite race, as well as challenging foes. Legions work as Aion's guild system, and allow players to easily team-up in groups. Low-level Legions go through developmental stages for companionship purposes. Also, it is a basic unit for big scale contents (Fortress Sieges, RvR, Raids) and is a gathering center for the players who share a common purpose.

There are many ways to enjoy the game, but joining a legion can be a great way of playing Aion since it gives a sense of affiliation. Legion members can share a Legion Warehouse, are entitled to wear a cloak which is a symbol of a legion, and can use a shield that has their legion emblem when they reach a required level. More importantly, being in a legion makes it easier enjoy many different contents that are designed for groups.

To view information about your legion, open the Legion Window (default: G). You can only access legion information if you belong to a legion.

While adventurers are capable of traveling throughout the world of Atreia on their own, it benefits them to join groups. Legions help players find those of like-mind who will aid them in their adventures, and enable them to easily find amiable group members. In the darkest reaches of Atreia, you may wish to have the aid of your associates to confront difficult foes. Those who form legions will know the full benefits of team work and survival, and will reap the rewards unavailable to those who wish to face these dangers alone.

To create your very own legion, speak with the Legion Founder NPC in your race's capital city and select Create Legion. All it takes to start your legion is the starting fee and a name. Beyond that, the following stipulations must be met:

If the above conditions are satisfied, enter the desired name of the new legion. The name will be verified to check for existing legions. If a legion exists with the name you wish or the legion name violates the naming rules, the legion will not be created.

Enter the name and click Confirm; the legion is established and the founder automatically becomes the Commander (Brigade General). When a legion is created or joined by a character, the character automatically gains a cloak with the Legion Emblem embroidered on it. This emblem can be changed through the Legion Emblem Manager NPC (located right next to the Legion Founder). However, all legion members are subject to the Legion's Level. Once a legion reaches level 2 or higher they are allowed to change the emblem, and at level 3 or higher they can register an emblem that they crafted themselves.

There are assets acquired from creating a successful legion. You may not need much to start, but you will need to continue to recruit and grow in order to take full advantage of being in a Legion. Legions have different levels, starting off at level 1 and eventually reaching level 3. Each level has different requirements and benefits, which include the ability to raise the maximum number of members a legion can hold, as well as granting legion members access to the purchase and use of new weapons and armor in the Abyss.

Requirements to advance the legion level:

To disband legion, speak with the Legion Founder NPC in your race's capital city and select Disband Legion. Only the Brigade General can disband the legion; others aren't allowed to do so. Also, please remember disbanding a legion is not available when items or money are stored in Legion Warehouse.

Legion merchants are only available to players in a legion. Items for sale will depend on the legion's rank. Talk to <Skan> in Pandaemonium or Gwenspena in Sanctum to see the legion-specific items they offer.

The Legion Menu for a Brigade General is shown as follows:

(The menus of normal legion members will vary from this, with less options)

As the leader of a legion, you can invite players (Invite to Legion) and control their permissions, or menu options (Set Permissions).

Currently there are two levels of membership after the leader: Centurion and Legionary. The Centurion title is usually reserved for the tier below the leader, but you can set permissions for both.

Should you grow tired of leadership, you can pass it along using the Entrust Brigade General Authority command. This must also be done before you can leave the legion. You can transfer the position of Brigade General to another character by using the Commander Appointment menu on the pop-up window. (You can transfer the position of Brigade General only to a member who is online). When you select Commander Appointment, you'll see a confirmation window to verify your intention to transfer the position. If you press the Confirm button, the character who's appointed will see a pop-up window which asks acceptance. When they click Confirm, the appointee will be the Brigade General and the previous commander will be a legion Centurion. All other Centurions will be notified of the change of commander through messages in their chat windows.

You can change the legion tag through Change Nickname.

At any time you can remove someone from your legion using Kick from Legion. Only the Brigade General or Centurions with the authorized rank can expel (forcefully remove) a member who they no longer wish to have as part of their legion. If you right-click on a character's Information window to open the pop-up window, you can expel the member by using the Expel menu. Or you can use the /Legion Expulsion command to expel the member. You can expel a member even if you are in another zone by using /Legion Expulsion "Player Name".

As leader, if you choose Leave Legion, you will leave the legion and pass leadership to the player that you assigned Entrust Brigade General Authority.

The Legion History automatically records the major events that have happened to the legion from when it was first created until it is disbanded. If you click the Legion History Tab in the Legion Window, the legion's history, such as the joining and disbanding of members, can be viewed.

The events that are recorded in Legion History

When the Brigade General and other eligible characters press the Compose Announcement button from the Legion Window, the Announcement Message entry window will be opened. Press Confirm after composing a message to save in the Announcement Window; the message will then be shown in the chat windows of all members online as well as to all legion members when they first log into the game.

Legion Functions for Each Level:

Legions may encounter enemies that not even they can handle. In these cases, legions can ally with other legions of the same faction by forming alliances. An alliance can have as many as 24 members in it at any one time.

Retrieved from "https://aion.fandom.com/wiki/Legion?oldid=74720"
Community content is available under CC-BY-SA unless otherwise noted.