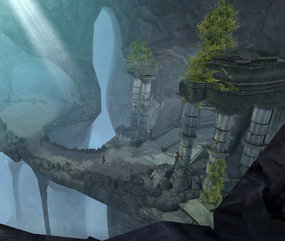 Kromede's Trial is a solo instance for characters of level 37 and above, added in the Assault on Balaurea expansion (Aion 2.0). This instance follows the story of Kromede, a fallen Shadow Judge, and gives insight into her tragic tale of love and betrayal. The entrance is located at Arbolu's Haven in Heiron (

The instance is relatively straightforward, progressing through the rooms and story line to the final fight. Some unique items and buffs aid the player as they progress. From the second run onwards players can choose what kind of loot they want to acquire: a chance at a Fabled-grade weapon of choice, or several guaranteed pieces from the Heroic Fallen Judge armor set, which all have a unique appearance and made for a popular skin set.

Prior to the 5.8 update, players must complete the following series of quests to be able to enter Kromede's Trial:

These four items can only be used in the instance and last for 2 hours, with various cooldowns.

There are four different buffs that can be acquired in various areas of the instance, which can be used for strategic advantage.

In the instance players appear and play as Kromede, but retain their own weapon and skills.

The first area is the Grand Cavern. Work through the mobs to get to the Grave Robber's Corpse. Complete

<Silver Blade Rotan>. Use Rotan to destroy the Sealed Door and move towards the Temple Vault. Continue to kill NPCs to reach the <Petrahulk Gatekeeper>, who has the key to the Vault door. Enter the Temple Vault and kill <Divine Hisen>, who will be more challenging to kill. It is recommended to clear (part of) the room prior to engaging him, so the player can get some distance when needed.

Pick up the Maga's Potion behind him to teleport into the Manor Dungeons. As the cutscene shows, Kromede breaks the cell door with Rotan.

The guard NPCs here are slightly tougher than the other monsters, so be careful with pulling them as you go. <Warden Baal> will patrol the area, and holds the key required to advance. <Robstin> is alive at this point of the story. On the right side of the pathway are a number of prison cells, where the player can kill prisoners to complete the side quest

<Dreams of the Dungeon> [p38] (Elyos). On the left is the Torture Chamber, where <Hamam the Torturer> can be found. Continue to move down the corridor to the Dungeon Hall, and defeat the <Manor Guard Captain> in the back to get the next key. Be sure to check the Old Relic Chest to get the

<Explosive Bead>, which is a powerful damage device.

Move back up to the corridor and head left to access Robstin's cell, who has been killed by this time. Seek revenge by killing <Guard Bitin>. Talk to the corpse, then move up the stairs. Open the door at the top of the stairs to get into the main Manor.

After working your way through the corridor you will arrive in the Manor Entrance area, which has the Prophet's Tower to buff damage. Turning left, head down to appear in the Kaliga Gardens and interact with the Sleep Flower to obtain the

<Sapping Pollen>. The Garden Fountain in the center will heal the player if interacted with. Going back into the main hall, climb the stairs and slay Shadow Executioner Austin to retrieve

<Maga's Potion>. The player may head left to access Lady Angerr's Bedroom, where they can fight <Lady Angerr>, or proceed to the right to enter the Banquet Hall.

Several cooks will be patrolling the Hall, and various guards will be located near the tables. The Porgus Barbecue and Fruit Basket (Kromede) are both found in this area, and may be interacted with for buffs. Once again turning right, the player will now be in the Kaliga Library. The upper level provides access to the Forbidden Book Repository and holds the third and last of Kaliga's subordinates, <Justicetaker Wyr>. Back down at the ground level, kill <Jeeves> in front of the bookcase door to access the final boss room, Kaliga Treasury.

Before the 6.0 update, players have to fight <Kaliga the Unjust> (Hard Mode) the first time they run this instance. During subsequent runs however you have the option to seek out and defeat the three mini-bosses mentioned above, which will then spawn alongside a weakened version of the final boss and affect the final loot options. After the 6.0 update this has become the new 'default' path, as all mini-boss rooms are now open during the first run.

Originally, the pathways leading to Kaliga's subordinates would be blocked during the player's first run, leaving them with no choice but to face <Kaliga the Unjust> (Hard Mode). This version uses skills that deal out significant damage. The key to defeating him is to destroy the Strength Relic to reduce the incoming damage, and optionally the Mana Relic to reduce the boss' defenses. Both may respawn after some time. If the fight takes too long, Kaliga may also summon golems, which need to be killed as soon as possible. This version of the final boss has a chance to drop <Kaliga's Key>, which can be used to open one of the weapon racks in the room to receive a Fabled-grade weapon of choice.

From the second run onwards, players have the option of seeking out and defeating Kaliga's subordinates. Defeating at least one of them makes the boss spawn as <Shadow Judge Kaliga> (Normal Mode), alongside the weakened versions of any previously defeated subordinates: <Distraught Lady Angerr>, <Injured Justicetaker Wyr> and <Wounded Hamam>.

Once victorious, use the Emergency Exit to leave the instance.

*These drops were removed in the 6.0 update*