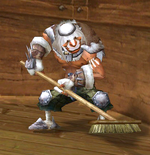 The Kobolds are one species of a larger group, called Sapiens. The Kobolds are organized into tribes, and each tribe is tied to a specific Krall tribe. The Kobold's religion is Shamanistic, and they worship gods who are anthropomorphised animals and creatures. For instance, one of their gods resembles a large Kobold with the head of a Brax, and another is tree-like.

Although Kobolds are primarily found in Elysea, they are also servants in the Haramel and Steel Rake instances. Many of the Kobolds can be found in the Dukaki areas in Verteron.

Kobolds use insignias to distinguish between male and female kobold warriors. Their houses have a rounded, angled interior and what look like dragon decorations outside. The purpose of the decorations is unclear, perhaps placed by the Balaur-worshipping Krall in an attempt to convert the Kobolds to their religion. Another possibility is that the tents are meeting places for rituals, since they contain no furnishings.

Retrieved from "https://aion.fandom.com/wiki/Kobold?oldid=75192"
Community content is available under CC-BY-SA unless otherwise noted.