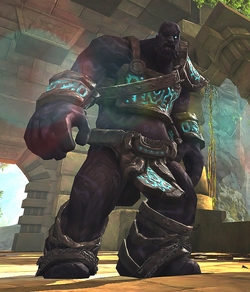 Jotun are mechanical giants crafted by Aion himself. The Dragonbound have only infiltrated a short way into the Jotun Studio but there are far more dangerous threats beyond here. The Jotun and their creations relentlessly guard their workshop. They were Aion's reaction to the Balaur threat. However, only a few of them survived the past hundreds of years. The ones who survived still serve Aion and act as if the Cataclysm never happened.

Retrieved from "https://aion.fandom.com/wiki/Jotun?oldid=100642"
Community content is available under CC-BY-SA unless otherwise noted.