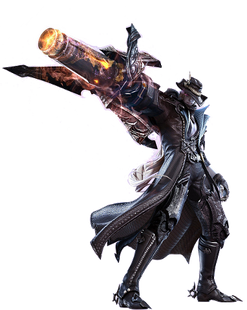 "A bullet sounds the same to everybody."

The Gunslinger is a class governed by Empyrean Lord Israphel. Players start out as Technists, and become Gunslingers upon Ascension. Gunslingers use Pistols and Aethercannons. The type of weapon used will affect combat style. Aethercannons have a slower attack speed but fire great powerful blasts. Pistols are much faster, and can fire off multiple shots in succession for a more dynamic style.

At first, most people dismissed the new research coming out of Israphel’s research center as “technist tinkering,” but when the power of their new Pistols and Aethercannons became apparent, and news of their success in the Abyss War became widely known. Even the Kaisinel Academy and the Marchutan Priory had to accept them as a force to be reckoned with. Soon, they acknowledged the Gunslingers as a new class, and many young Daevas aspired to become one.

In Aion, Gunslingers are considered a primary magic DPS class and thereby a primary DPS, alongside Sorcerers, Rangers, Assassins and occasionally Songweavers. They have extremely high DPS, which are executed in swift successions. Like Assassins, they have the potential to burst down targets very quickly without allowing them to react. They also have a small arsenal of CC (Silence, stuns, etc), which gives them the ability to continually lockdown and burst targets/opponents.

With an aethercannon equipped, they have access to a variety of long-charging but extremely powerful nukes that rip targets to shreds. WIth dual pistols equipped, they can unleash an array of rapid chained magic abilities on single targets. Often at times, you'll find yourself switching between an Aethercannon and dual pistols depending on situations.

Gunslingers are usually equipped with magic leather armor, which provides physical defence, magic boost and high evasion. Gunslingers also have a few defensive abilities that can be used to escape or absorb some damage if needed. But if they come under intense fire, they will die very quickly as they are still a class with low HP pool and overall defence. Like the Ranger, Assassin and Sorcerer, they also have the ability to detect units in advanced stealth.

Retrieved from "https://aion.fandom.com/wiki/Gunslinger?oldid=94800"
Community content is available under CC-BY-SA unless otherwise noted.