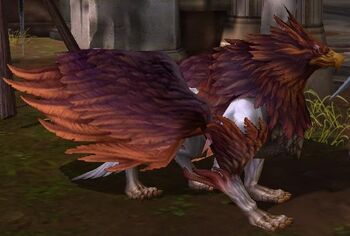 Our community needs more information on this page! Can you help out? Click here to add more.

A Griffon is a creature with the body of a lion and the head and wings of an eagle. They are hunted for their meat and hide, and their plumage can be used in making equipment.

A Griffon's young is called a Griffo, and emerges from an egg. Although they are much less developed than adults, they will still defend themselves if attacked.

Wild Griffons are highly territorial and protective animals with keen eyes and hearing, who will attack intruders without full regard to their own safety. They are known to mainly emerge during the daytime, and nobody knows where they go to at night.

Griffons are tamable, and can be re-educated to protect Humans. They can be used as Guards in towns and villages.

Retrieved from "https://aion.fandom.com/wiki/Griffon?oldid=14678"
Community content is available under CC-BY-SA unless otherwise noted.