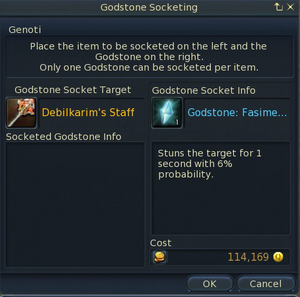 Godstones were items that imbued weapons with secondary effects. Such effects could include bonus damage (generally good for PvE) or inflicting a special status on an enemy such as stun or paralyze (preferred in PvP). Godstone effects were applied by chance, with every skill the player used granting a small probability of triggering the godstone effect. The activation rate % varied per godstone.

Once applied, the weapon would take on a glow to represent its newly added power.

The Godstone system was removed from the game with the 6.0 update.

Originally players had to talk to <Genoti> in Pandaemonium or <Berus> in Sanctum to socket or replace a godstone. After the 4.7 update players could just right-click the godstone they wished to socket and then click on the target weapon to imbue it themselves. Alternatively players could select the weapon they wished to imbue with a godstone, and then socket it via the Godstone Socketing tab in the gear modification window. Once applied, the weapon would take on a glow to represent its newly added power.

Through the 4.x update a new type of Godstone was introduced, Ilusion Godstones. They provide a higher activation chance with more powerful effects than their regular counterparts, but in return had a small chance to be destroyed each time the effect was triggered. If this happened the player would receive a notification that the godstone had broken and would disappear within the next 10 minutes.

Godstones (or rather the pouches containing them) were relatively common rewards from events. Illusion Godstones could also be acquired from the Atreian Passport feature, completing the Crucible Spire, or by completing dailies for the Fortuneers (Elyos, Cygnea) or Charlirunerk's Daemons (Asmodians, Enshar) organizations. Monsters in instances also had a chance to drop godstones, albeit at an abysmally low chance and these types usually being Heroic-grade only.

Retrieved from "https://aion.fandom.com/wiki/Godstone?oldid=103066"
Community content is available under CC-BY-SA unless otherwise noted.