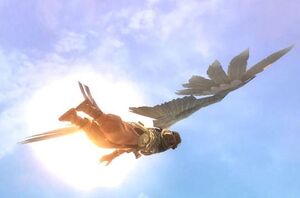 Gliding is a way of flying, and allows you to safely and slowly descend fall from high altitude.

Gliding can be used everywhere, even in areas where you can't fly. The ability to Glide is governed by momentum, so the higher you are, the further you will be able to go. Gliding is a gradual descent and you cannot rise manually as you would with Flight, however you may experience updrafts that will take you higher and increase your flight distance.

Once you are in the air, either flying or falling, pressing the Space Bar will activate Gliding mode. Speed of the descent is controlled by leaning forward (W) or back (S). The mouse can be used to control your direction, the same as flight.

Pressing the Space Bar once you are Gliding will retract your wings and cause you to fall. This can be easy to do and there is then a 10 second cool off before you can Glide again.

Gliding is governed by the same timer and cooldown period as Flight. This meter shows how much time you have left to glide.

The flying gauge is yellow while gliding, while the flying meter appears green.

Updrafts can be used to increase your altitude while gliding, to sustain your glide for a longer period of time. You can almost always catch an updraft over water. You can also get good updrafts next to cliffs, walls, or even edges of paths that may only have a slight raise in elevation. There's still a chance of getting one on flat terrain, but it is harder to sustain a glide over a flat area.

Retrieved from "https://aion.fandom.com/wiki/Gliding?oldid=38394"
Community content is available under CC-BY-SA unless otherwise noted.