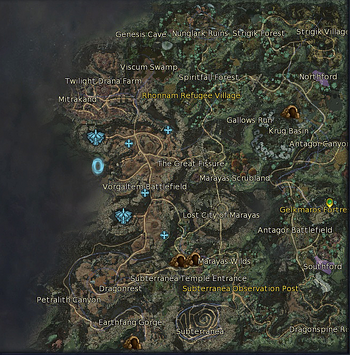 Gelkmaros is the first Asmodian foothold in Balaurea. This ancient battleground, introduced in the 2.0 update, was originally part of Tiamat's territory, but was since seized by the Asmodian army and became the main leveling area for level 50 to 55 Asmodian characters.

With the 6.0 update content on this map was adjusted to cater to players between level 41-55.

Lay of the Land Edit

Gelkmaros is rife with rifts and also connects to Inggison via the Silentera Canyon, putting a greater emphasis on the game's PvPvE aspect. With a varied landscape and many ruins, including the destroyed city of Marayas in the center, this land is hostile and demanding of travelers. The main city of Gelkmaros Fortress stands as a safe haven and arrival point.

In Gelkmaros players will be acquainted with the windstreams that are typical of Balaurea, as well of other, minor ways of transportation such as geysers. Besides the rough environment, travelers will need to be wary when they leaving the lower-level area (right section of the map); the area beyond the fortified gates is often the scene of PvP due to Elyos incursions.

Gelkmaros originally featured two fortresses. The Asmodian faction would need to possess both of them to unlock access to Silentera Canyon and thus Inggison. In a later patch this requirement was lowered to one fortress, and eventually removed altogether. In Aion 4.8 both fortresses were destroyed during the Upheaval, and have since been removed from the game.

Retrieved from "https://aion.fandom.com/wiki/Gelkmaros?oldid=101670"
Community content is available under CC-BY-SA unless otherwise noted.