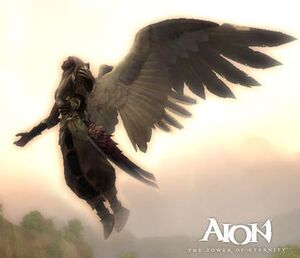 After completing the ascension quest at level 9, you are sent to the capital to receive your wings. You will become a Daeva and gain the power of flight.

Once you have your wings they will play a key role while adventuring Atreia. You can travel faster, reach certain locations that are only available by flight, Extract Aether, and partake in aerial combat.

The ability to fly relies on Aether, and because of this in some areas you cannot fly. These areas are known as no-fly zones, however you are still able to glide in those areas.

The first areas you're able to fly in are Altgard Fortress (Asmodian) and Verteron Citadel (Elyos).

The flight meter shows how much flight time you have left before your wings grow tired and you must rest. The base flying time is limited to 1 minute, but you are able to extend that time with certain equipment, titles and items.

If time runs out before you touch ground, you will begin to fall and can suffer damage or even death upon impact.

When in flight, your Mini-Map will display either blue or red wings, depending on your height. Blue wings mean you are at a safe height although you may suffer some damage if you fall. Red signals that you have reached a height that will result in certain death should you fall.

The basic default keys on how to fly. Once off the ground, movement can be governed in the same manner that it is on the ground, by using the W, A, S, D keys and by pointing your mouse while right-clicking.

As you progress in the game you will be able to change the appearance of your wings by equipping Wing items.

Wing Feathers are relatively expensive and the lowest level feather is 30. Wing Feathers change the appearance of your wings and improve your flight time. These items can be equipped and removed like any other armor or accessory and add additional flight time.