The Fast Track Server was a shared server for players up to Level 65 (level range extended in later patches). On this server players could play alongside players from other servers, and received double XP from mob kills (but not for quest rewards) as well as old gathering professions such as Essencetapping and Aethertapping. Eventually it became the default server for new players.

The fast-track server was removed from the game with the 6.0 update, as it had become redundant following the readjusted XP curve. 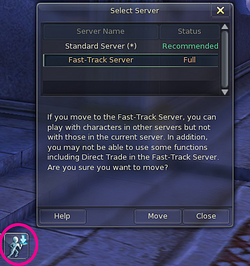 Once clicked, a box will open up giving the choice of Standard Server or Fast Track Server. If the fast track option is grayed out, the area does not support that server. Chose the server, and click <Move> to change servers.

There are some areas of Atreia where there is no Fast Track Server Option. These are the capital cities of both factions (Sanctum, Pandaemonium) as well as the housing districts (Oriel, Pernon). Moving to these areas will instantly put the player back on the Standard Server.

The Fast-Track Server was set in an alternative timeline of Aion where the Cataclysm never occurred. As of such there were no rifts and thus no means to PvP (except duels), making it a full PvE server.

Since the Abyss also never came into existence this also meant that certain Abyss instances were unavailable, although some of them received an alternative access point to allow entry in later patches (such as Nochsana Training Camp and Beshmundir Temple).

Other limitations included the inability to trade between players and setup private stores, although looted items from dungeons could still be traded between members for 5 minutes. The Mentoring system was likewise disabled, and players could not join a legion or invite others to join theirs. Players could still receive and read mail but not write it. The broker was still fully usable, and allowed players to interact with the standard server in this way.

Retrieved from "https://aion.fandom.com/wiki/Fast_Track_Server?oldid=103362"
Community content is available under CC-BY-SA unless otherwise noted.