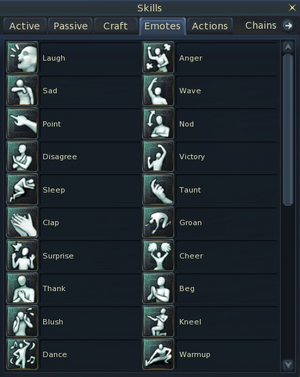 An emote is a form of expression, allowing characters to express their emotions or other visual actions in the game. Emotes generally are used for communication with other players and have no effect on NPCs or game play itself.

Emotes are generally activated by a "slash command", that is - a text command beginning with the slash (/) key. Emotes can also be activated using the in-game menus. A text description of the action is also available to those near the character performing the emote. Additionally, the text is modified depending on the target that is selected to indicate who the action is intended for. For example typing /smile with a character named Bob selected will say, "You smile at Bob" in the chat box.

As well as slash commands,certain words used in chat can trigger emotes. For example typing "No" in chat will produce the /disagree emote.

1/LookMirror's emote when someone is targeted says you are looking at them in the mirror, yet it is the same emote of you looking at yourself.
2/SnugglePet only triggers if you have a pet selected.

A character starts with the default set of emotes, but can learn more later on.

A selection of emotes can be found at the preceptors in each capital: <Seriphim> (Pandaemonium) and <Andreas> (Sanctum).

Some emotes, such as Veteran Rewards, are learned through cards.

Retrieved from "https://aion.fandom.com/wiki/Emote?oldid=95435"
Community content is available under CC-BY-SA unless otherwise noted.