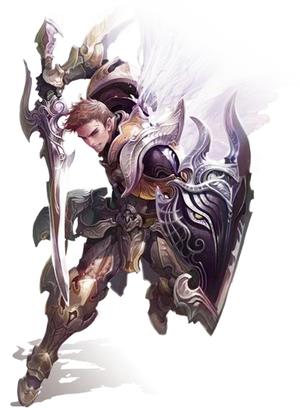 The Elyos is one of the two factions of Daeva resulting from the Millennium War. They are locked in an eternal blood feud against the Asmodians, whom they hold responsible for the destruction of the Tower of Eternity.

The Elyos live in the kingdom of Elysea, which spans the lower half of Atreia. Their environment is filled with light and growth and because of this, the Elyos have been shaped into having a more lively, vibrant, "lighter" appearances. They are considered the more beautiful of the two races. Some of the Elyos also have feathered wings, giving them an angel-like appearance.

As people, the Elyos can be kind and warm, if slightly arrogant. No trace of this kindliness can be found when facing their foes however. The Elyos are fierce, deadly warriors.

The Elyos serve the Five Seraphim Lords, who helped them build their capital city of Sanctum and guided them to safety when all seemed lost.

In older interviews or discussions on the internet, the Elyos may be referred to as the "Chun" (which is their Korean name), the Chosen, or the Angelic race.

Due to player interests, the Elyos population will most probably be larger. Fewer leveling grounds may make players feel they are leveling more slowly in the beginning (unlike the Asmodian, who level quickly in the beginning and slow down after mid-level.

As Elyos characters level, they will earn race specific skills. Because of this, same classes from the two races will differ slightly.

When Aion sent the Empyrean Lords to guard the Tower of Eternity from Balaur, he created a magical force known as the Aether that the Lords could tap into. Over time, humans began to connect with this magical power, and they grew abilities far beyond mortal men and women. Now armed with incredible strength, the ability of flight, and other mystical powers, these creatures were known as Daeva. As time moved forward, their numbers began to grow to the point where the Empyrean Lords began to use them as an army to fight the Balaur in what would become known as the Millenium War.

Over the centuries of fighting, the Empyrean Lords and Balaur both began to tire of their losses, and the Empyrean Lords began to suggest a peace. The issue heavily divided the Lords, as half of them believed that they should continue to fight. Eventually, seven of the Lords became convinced that peace was the correct path, and they extended an invitation to the Balaur over the objections of the remaining five Lords. Meeting at the Tower of Eternity, both sides seemed willing to engage in an actual peace treaty. However, during the meeting something went wrong and, for reasons unknown, one of the Balaur Dragon Lords was slain. Enraged, the Balaur attacked the Tower and shattered it, splitting the very anchor that held the world in two.

Two of the Empyrean Lords gave their life to prevent Atreia from drifting into space, but the damage was already done. Now the two halves of the planet were split in two and divided by the mystical Abyss. The remaining Empyrean Lords were split into two camps of 5 each; those who believed that the peace treaty had been the right move, and those who did not. Those who did became known as the Five Seraphim Lords, and they took their army of Daeva to the bottom half of the newly split world. This new land was beautiful and radiant, and these Daeva began to believe that they were the chosen ones of Aion.

Calling this new land Elysea and adopting the name the Elyos, this new faction blamed the other five Empyrean Lords (now known as the Five Shedim Lords) and their armies, believing that they had sabotaged the peace process and thus caused the destruction that destroyed the world. Vowing to protect the remains of the Tower of Eternity that rest on their lands, the Elyos went about rebuilding their kingdom, unaware that Shedim Lords and their army of Daeva still lived on the other side of the Abyss. Both kingdoms would have peace for centuries until portals to the Abyss began to pop up, allowing the two sides to access each other. Realizing that the other factions were still alive, the Elyos engaged in a brutal war with their rivals that still lasts to this day.

Although the Elyos differ in physical appearance from their Asmodian counterparts, their skills and abilities are relatively the same. They both have access to the same classes and only have very minor differences in a handful of spells. The notable exception to this is the Spiritmaster class, as Elyos Spiritmasters get access to a unique wind/water spirit at level 50, while the Asmodians get a unique fire/earth spirit.

Origins of the Elyos (Video)[]