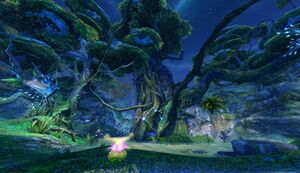 Elementis Forest is a group instance for Level 57+ players. The entrance is found in Sarpan, at the 9 o'clock position. The instance is split into two parts - Elementis Forest and Argent Manor. The maximum number of players is 12. The re-entry is reset every day at 9 am.

Elementis Forest has been home to spirits since the beginning of time, and is the source of many of the spirits that have found their way into Balaurea and Atreia. Until recently, their power was so strong that nobody else could enter. The Reian sorcerer Davlin knew that this place was the source of the spirits, and went to the forest to research them. She had her Golems build a mansion there, and lived and worked there successfully for a while. But Zadra, the Drakan sorcerer, craved the power of both the spirits and of Davlin's Golems. He imprisoned Davlin, and took over her mansion and Golems. Then, he took up her research where she had left off, and hit upon the idea combining the power of the spirits and that of the Golems. After not hearing anything from Davlin for a while, the Reians began to worry and are asking their friends among the Elyos and Asmodians to find out the current status of the Reian sorcerer and to rescue her.

After getting the quests and entering the instance, head to the east towards the first boss. The key elements of success in this instance are to be sure not to pull the aggro from the tank, and to promptly kill adds.

The first boss - The Canyonguard does AoEs, so it is best to used ranged attacks with only the tank closeby. When he spawns rocks, the dps should focus fire on them before they transform into earth spirits.

After killing him, continue on down Ravine Trail to the next boss - Jordan the Cursed. This unicorn-like boss has some AoEs as well. When the boss disappears, invisible adds will spawn that should be killed as quickly as possible. There are nearby plants that are used by players to be able to see the invisible adds. There are 4-5 waves, depending on how quickly the boss is killed.

Continue to the south to get to the next boss - Head Kutol. Again, this boss has some AoEs. He spawns head-shaped adds, which need to be killed quickly after spawning. A strategy is to kill all the mobs from the hill down. Then the templar hits Kutol and runs down to the big rock. Kutol crashes to rock and breaks and spawns chest. After killing him, head to the center then west.

The last boss Tuali is a fairly decent fight if players debuff properly. He has a debuff that cannot be dispelled that continuously does damage. Wait until there are 3 debuff dots, then use the golem on the ground to dispel them on yourself.

Retrieved from "https://aion.fandom.com/wiki/Elementis_Forest?oldid=103640"
Community content is available under CC-BY-SA unless otherwise noted.