Dredgion is a battleground group instance. In this battle, two 6-man groups of Elyos and Asmodians infiltrate the ship. They will have to deal with not only Balaur, but each other as well.

This timed instance is based on points; the team with the highest amount of points will win at the end of the instance. They can be acquired by killing the opposing factions and ravaging the different rooms.

During Aion's history, each patch would introduce a new Dredgion instance for the appropriate endgame level bracket. As of 6.0, all were disabled, with the exception of Ashunatal Dredgion.

These dangerously destructive terrorise different parts of Atreia. In the past, the only way to counter their presence was to hide. However, as research continued of these machines, Daevas eventually found a way to infiltrate the inner chambers and take out their captain.

When a Dredgion arrives and gets close enough, different administrators will be able to transport a small group of Daevas on board. Every ship is assigned a different region. The Baranath Dredgion, controlled by the Baranath Legion, roams around Reshanta, sometimes attacking the fortresses. The Chantra Dredgion, driven by the Chantra Legion, hovers around Inggison and Gelkmaros. The Terath Dredgion, steered by the Terath Legion, floats above several regions of Balaurea; at first, Sarpan, Tiamaranta and Katalam, however it may still be spotted around Cygnea and Enshar.

Due to the assaults on the Aturam Sky Fortress, <Ashunatal Shadowslip> planned to flee from her chamber. She swiftly gathered remnants of Tiamat's army and escaped the facilities by hijacking a stationed Dredgion. Currently flying across Balaurea's skies, her thirst for Daevas' blood and she having access to a powerful warship might present a fierce threat. As such, Daevas turned their eyes towards this menace.

The instance can only be access at certain times of the day. They may queue up by using the queuing up window or by talking to certain NPCs. Provided the times are not up, both these features will be unavailable.

Alternatively, and periodically, after reaching level 46 players will begin getting an icon on their screen, to the right of the hotbar, labeled "Request Entry", Clicking on this will bring up a box briefly describing the Dredgion battleground and offering three possible Entry Modes:

Each team is comprised of 6 members. When choosing a quick or private entry, the Dredgion will automatically try to balance a group out with at least one of each class. The teams can be viewed in the Dredgion menu, located on the score and timer bar.

If the user cannot be matched to an instance within 30 minutes, the queue will close. When the instance is ready to begin, the user will be teleported to the instance from anywhere in the world, and are free to hunt or chat while waiting. They will receive a confirmation window before teleportation and, if not responded to within 2 minutes, the application is cancelled. The instance cannot be entered while in battle, flying or being dead.

Once players have entered the Dredgion, the goal is to eliminate both PCs and NPCs from the Dredgion, as well as take control of key sections and defeat the captain of the ship. Every action is rewarded with points. The winning team is the one with the most points. The instance may either end by running out of time or defeating the captain. Even if the captain is the most important monster in the instance, defeating it will NOT guarantee a win to a team; it is strictly based on the team's points.

Surkanas act like control points, nodes inside each room of the instance. By destroying them, the room will be claimed by the team which deals the last point in damage. When a Surkana is destroyed, it will award the team a high amount of points. Depending on the relevance of the room, the amount of points awarded; the most crucial ones being the ones in the eastern rooms of the instance and the Gravity Control Room.

Each attack will deal 1 point. When struck, all Balaur in the room will be alerted of the Daevas' presence and attack them, making it mandatory in most cases to clear the whole room before hitting it.

Since the big majority of points in the instance is rewarded from taking rooms. This activity is the most crucial part of the instance, other than PvP. The captain will only spawn once at least five rooms are claimed.

Each room holds a named mob (most of them being the Surkana's protector), sometimes more depending on the room. Most notably, Gravity Control Room and Barracks will hold bosses which have a chance to drop AP relics or special PvP accessories. Meanwhile, the room in the middle will hold a named Balaur holding a key, lootable by one person, which can be used to open the doors blocking the way to the Captain's Cabin from the rooms on the sides. The Barracks room will also hold special generators which when destroy will spawn portals to the Captain's Cabin.

The Dredgion has a 40-minute time limit once the two minute preparation stage has passed. Within this time limit, players must gain as many points as they can.

Players gain points for the following:

Players lose points for the following

The conflict can end in one of three ways:

1. The Captain is defeated
2. The opposing team leaves the Dredgion
3. The time limit expires 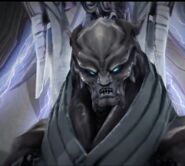 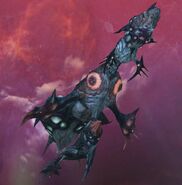 A screenshot of a dredgion passing over a fortress in the Abyss.

Add a photo to this gallery

Retrieved from "https://aion.fandom.com/wiki/Dredgion?oldid=102774"
Community content is available under CC-BY-SA unless otherwise noted.