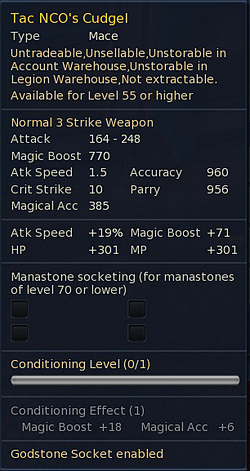 Conditioning is a way to temporarily increase the attributes of armor and weapons. Condition duration is affected by the level of conditioning, frequency of use, and if Divine Power is used while the item is equipped. If an item can be conditioned, there will be a bar near the bottom indicating the conditioning level and the effects. Equipping and unequipping gear also reduce the durability.

Conditioning gained popularity with the introduction of Archdaeva gear (crucial for PvE gear), but it was ultimately discontinued in 6.0.

There are several conditioning officers who will charge kinah to condition items. This is the least expensive option.

Retrieved from "https://aion.fandom.com/wiki/Conditioning?oldid=103063"
Community content is available under CC-BY-SA unless otherwise noted.