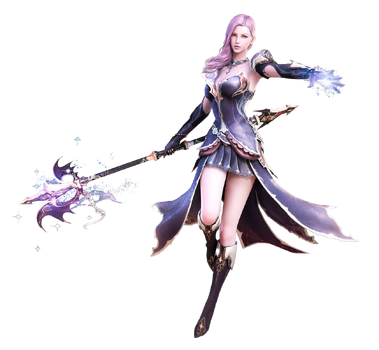 Having a profound mastery in enchantment magic, a Chanter benefits a group greatly by boosting various attributes of every group member.

For a better idea of what the Chanter can do, visit the List of Chanter skills.

Chanters have many supportive abilities which include some of the best buffs in the game as well as having access to some healing spells. The Chanter has a unique special buff system known as the mantra system. Mantras can be instantly cast at any time and stay in effect until the chanter decides to either cancel it or replace it with another mantra. Mantras are also canceled when the chanter dies. Unlike normal buffs, mantras cannot be dispelled by any means.

Up to three normal mantras can be used simultaneously at any time, unless in a group with another Chanter, then 4 can be used collectively, and as each mantra has a unique effect, there are many different combinations that can be used to support a party. A caster heavy party make up would benefit greatly from magic boosting mantras while a melee heavy one would benefit from the physical attack power and critical rate increasing mantras. All mantras affect all group members in the vicinity of the Chanter. Along with mantras, The Chanter also has a variety of enchanting buffs that further boost the group's attributes, be it damage, an attack speed boost or even reduced cast times on spells.

If the group is not in much danger, Chanters will also focus on dealing DPS while maintaining its supportive buffs and mantras. Hence, Chanters are also considered a secondary DPS class (Or even a primary DPS in some instances). Despite having an array of supportive and healing abilities which are magic spells in nature, their offensive abilities deal mostly physical damage, in contrast to Clerics. Therefore, most Chanters usually choose to wield a staff as this increases physical damage and traits over a mace and shield combination. It is also important to note that all critical strikes dealt with a staff have a chance to knock down a target. This aspect, combined with the fact that the staff has a naturally high critical hit rate, as well as the fastest attack speed of the two-handed weapons, turns the Chanter into a very effective lock-down class. However, should a Chanter come under fire, a Chanter can selectively wield a mace and shield combination to mitigate some damage while their heals and buffs try keep them alive.

In solo play, Chanters are easily one of the most effective solo classes in Aion, being able to heal up when the health reaches critical levels. With the exception of some stigmas, the Chanter however, does not have very strong bursting skills unlike classes such as the Gladiator or Assassin, hence they will not be able to take down mobs as fast as the other classes.

In group play, a Chanter's main role serves to support a group in both offense and defense. If a bad pull is made, or when the group is facing a very strong boss, the Chanter can also immediately activate strong defensive buffs and aid a Cleric with healing in their party. If the run is progressing smoothly, a Chanter can significantly increase the DPS of a group. As such, any party can easily be rounded out by having a Chanter in their ranks. Chanters are also decent disablers with their staves, knocking down or stunning enemies or monsters. One thing to note though is that Chanters do not have reliable damaging AoE skills. Having a chanter in a group maximizes its potential, by being able to enhance all attributes.

In solo PvP, Chanters are very well rounded and do fairly well against most classes. Their decent physical defense helps to mitigate damage against physical DPS classes. Against Melee classes in particular, with their Celerity Mantra I and using running scrolls, they can easily kite the enemy. Against ranged classes, Chanters can attempt to close the distance gap fairly quickly by using one of the best ranged but somewhat unreliable stuns in the game, Soul Strike for Asmodian Chanters/Inescapable Judgment for Elyos Chanters . With its long 25m range and very short cool-down period (12 seconds), Soul Strike/Inescapable Judgment further augments the chanter's already remarkable lock down capabilities. Certain stigmas can also further increase the damage and lock-downs dealt by the Chanter. It should also be noted that Chanters are rather susceptible to Magic DPS classes such as Spiritmasters and Sorcerers due to their high bursts and CC abilities (Sleep, fear, silences).

In group PvP, Chanters often find themselves doing several roles, such as rallying and supporting the group offensively and defensively with various buffs and mantras, and/or aiding a Cleric in healing. With suitable stigmas equipped, they can also unleash an array of DPS and lock-down skills. Should a team member come under focused fire, a Chanter can immediately cast powerful healing over time spells and activate powerful defensive buffs (Word of Spellstopping I, Elemental Screen)  that can help in mitigating damage. If a target is pulled in by a Templar, a Chanter can decently hold the target in place with their powerful knockdowns and stuns while the group dispatches them. Having access to unique and powerful game-changing buffs such as Word of Wind I and Word of Quickness I, a Chanter can also turn the tide of a battle, bringing offense to a whole new level.

In summary, the Chanter is an effective solo class and an asset to any party. One thing to note when playing a Chanter is that it is important to keep the mindset of both its supporting and healing roles. While a Chanter can be played as either a pure DPS class depending on stigma skills, or as a pure support and sub-healing class, an effective Chanter will keep both in mind while switching to the one that is most beneficial to the party.

As far as weapon choice goes, Staff should be used the majority of the time. However, a backup Mace and Shield can be used for additional defense.

Retrieved from "https://aion.fandom.com/wiki/Chanter?oldid=104200"
Community content is available under CC-BY-SA unless otherwise noted.