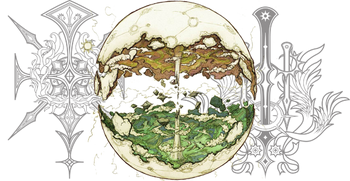 Atreia is the "planet" in the Aion universe where the game is played. Unlike planets of our universe, Atreia resembles two hollow hemispheres (or rather, "hemi-shells") with a single axle tower, the Tower of Eternity, connecting the centres of the two halves. Life flourishes inside the shell-like bowels, while the "surface" of the world fosters unique and dangerous forms of life.

Prior to the Millennium War, all life giving energy was supplied by Aion, shining forth from the Tower of Eternity in the centre of the planet.

However, due to a cataclysmic event after the Millennium War, the Tower of Eternity is now broken, and rifts in the fabric of space known collectively as The Abyss now occupy much of the centre of Atreia. What was once a single tower is now two towers divided by the two Atreias, the Tower of Light, and the Tower of Darkness.

The light from the nearby star reaches downward inside Atreia, illuminating the lower hemi-shell, where the kingdom of Elysea is located. However, little light reaches the harsh wilderness of the kingdom of Asmodae.

Before the Cataclysm, Atreia was a vibrant paradise filled with lush landscapes and bountiful pastures as far as the eye could see. The Tower of Eternity provided all life giving energy including light, warmth, and Aether. The energy of Atreia was stable, one could fly almost anywhere as they would in the Abyss. The ancient city of Siela was enormous. Nearly all life was concentrated in Siela for its protection from the Balaur and sapiens. The city was more breathtaking than Sanctum and Pandaemonium could ever hope to reach. Humans did wander outside of the city, and lived in scattered metropolises such as Roah, Kungalfberg, and Nolantis. Other settlements included the ruined breadbaskets of both Asmodae and Elysea such as Heiron, Brusthonin, Beluslan, Theobomos, and Eltnen were flourishing and untouched. And of course Asmodians, Elyos, and Reians were all one people. The prosperity of Ancient Atreia was forever lost after the attempted peace treaty with the Balaur failed, and the Dragon Lord Fregion shot a bolt of fire that destroyed Aion's tower.

Asmodae is the frigid and dark upper half of the shattered world of Atreia. Once the centre of most human settlement and prosperity, Asmodae became a world unfamiliar to anything Atreia ever knew. Hostile, scarce, and largely barren, life was forced to evolve and grow stronger. The survivors of the Cataclysm evolved into beings resembling demons and vampires. Once weak, shell shocked, and despair, they evolved and learned to be strong, resourceful, and adamant beings. Although still foregoing reconstruction, Asmodae is seeing a recovering world. Despite what one would think about a world such as Asmodae, the world is as beautiful as it is tragic. Although lives belonging to both Asmodian and Elim cannot return, a friendship based on mutual survival and prosperity keeps both races hanging on. Even certain Mau and Skurv are working together with the Asmodians. The people of Asmodae are natural warriors; the blades that once slaughtered countless Balaur are still sharp and ready. No matter the foe, the Asmodians will find a way to crush them into the dirt. Asmodae is a symbol that true dedication and conviction can turn a miserable world into something worth fighting for.

Elysea is the radiant and sun-filled lower half of the shattered world of Atreia. Seeing the least amount of catastrophy from the Cataclysm, Elysea is the closest thing to how Atreia looked before the world shattered into pieces. Warm, carefree, and plentiful, life was able to go back to how it was, like the Cataclysm never happened. Bathed in more light than ever before, the Elyos turned into slightly more angelic looking beings than they once were. Dwelling in pride that their decision for peace was just, the Elyos became self-absorbed and arrogant. They believed that they were the chosen race of Aion. The spoiled mentality of the Elyos, of course, came with repercussions, and they became increasingly helpless to the expanding Krall Empire. Holding Daevas with full responsibility for protecting Elyos society, humans have grown over-reliant and ungrateful towards their divine guardians. However, the Elyos aren't completely defenseless, the glory and fanfare of heroic warriors are enough motivation for certain Daevas to become gutsy. Viewing the war with the Asmodians as a crusade, the Elyos cannot allow their perfect world to cease to exist.

The name "Balaurea" was given to the outer surface of Atreia, meaning land of the Balaur. For thousands of years many people thought that life outside of the Aether rich shell of Atreia was impossible. The land of Balaurea is almost completely absent of Aether, making life very hard for Daevas. Despite the lack of Aether, life in Balaurea flourishes. Most forms of life in Balaurea are much more vicious and predatorial than any other however. Although vicious, Balaurean nature is much more verdant and green than even Elysea (as the land receives direct sunlight from the nearby star). A paradise for the Aether intolerant Balaur, the Balaur have evolved into beings far more superior than they were in Ancient Atreia and their counterparts in the Abyss. Appearing humanoid and gigantic, the Balaur are foes not easily to be messed with.

Consisting of human survivors of the Cataclysm, the Reian people were all members of Siel's Spear Legion. Sent on a expedition to the lands of Balaurea, the Reians fought heroicly against the Balaur horde. After the death of Lady Siel, the Reians lost their divinity, and were left defenseless. Still holding onto their immortality, the Reian people struggled to survive in a world without Aether or any of the 12 Empyrean Lords. After the admission of Kahrun into Reian society, the Reians gained resolve and unity. Learning from the Jotun of Balaurea, the Reians discovered power that rivalled both the Asmodians and Elyos. After the death of Tiamat and the missing whereabouts of Kahrun, the Reian civilization fell into disarray. The capital city of Kamar was destroyed by Beritra's forces.

Flourishing around the same time as the Ancient Atreians did in the shell of Atreia, the Danuar were benevolent beings that wielded the same strength and intelligence as the Balaur. Seeing themselves as absolute perfect beings, they saw themselves as protectors of everything good, while the Balaur were the incarnation of all things evil. Holding reign in the regions of Katalam and Danaria, the Danuar wielded power that even the Balaur feared. Utilizing the power sources Ide and Idgel, the Danuar constructed golems and advanced forms of technology far superior to that of the Elyos and Asmodians. Before their end, the Danuar constructed a terrifying creation that would've devastated the Balaur, Hyperion. Unfortunately both Beritra and Tiamat drove the Danuar to extinction, and it is up to Daevas to give retribution.

Retrieved from "https://aion.fandom.com/wiki/Atreia?oldid=104238"
Community content is available under CC-BY-SA unless otherwise noted.