The Asmodian faction is one of the two factions of Daeva that were created as a result of the Cataclysm. They are locked into an eternal blood feud against the Elyos, holding them responsible for the destruction of the Tower of Eternity.

The Asmodians live in the upper half of Atreia, known as Asmodae. Their capital city is Pandaemonium, and they follow the five Shedim Lords, the five Empyrean Lords ordered by Siel and Israphel to protect the upper foundation of the Tower of Eternity. They live in a darker, more dangerous environment than the Elyos and have thus been shaped into having a more demonic appearance.

Despite their looks, the Asmodians are friendly and loyal to their own people. Their world has made them battle-hardened and powerful. 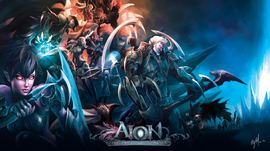 Originally part of the Daeva army that served the Empyrean Lords, the Asmodians joined the Five Shedim Lords on Asmodae after the Tower of Eternity was destroyed. Blaming the Elyos for the destruction of Atreia, they have learned to adapt to the harsh and dark climate of their new homelands. It is time to enact retribution.

The History of the AsmodiansEdit

When Aion sent the Empyrean Lords to guard the Tower of Eternity from Balaur, he created a magical force known as the Aether that the Lords could tap into. Over time, humans began to connect with this magical power, and they grew abilities far beyond mortal men and women. Now armed with incredible strength, the ability of flight, and other mystical powers, these beings were known as Daeva. As time progressed, their numbers began to grow to the point where the Empyrean Lords began to use the Daevas as an army to fight the Balaur in what would become known as the Millenium War.

Over the centuries of fighting, the Empyrean Lords and Dragon Lords both began to tire of their losses, and humans became skeptical on their faith towards their own lords. Lord Israphel feeling frustrated, schemed a plan that would've obliterated the Balaur. He proposed peace with the Dragon Lords. At first being ridiculed by all the lords, he swayed both Lady Ariel and Lady Siel; many other lords followed in solidarity. The issue heavily divided the Lords, as half of them believed that they should continue to fight. Lord Azphel was the most verbal about the stupidity and recklessness or such a plan. Eventually, 7 of the Lords became convinced that peace was the correct path, and they extended an invitation to the Balaur over the objections of the remaining five Lords. Prior to the inventation, Lord Israphel and Dragon Lord Beritra met in secret, bargaining the lives of his very own brothers and sisters. Reaching an agreement, Beritra would sway Arch Dragon Lord Freggion into agreeing at the cost of all 11 Empyrean Lords. Meeting at the Tower of Eternity, both sides seemed willing to engage in an actual peace treaty. But that was only a facade. Already plotting a sabotage, the Balaur executed Dragon Lord Vritra and sowed discord amongst the assembly. -Enraged, the Balaur and Daevas went to war once again.

Before Lord Israphel could use the Tower of Eternity to destroy the Balaur, Lord Freggion was one step ahead, and launched a bolt of fire towards the tower. The world was shattering right before the eyes of every Daeva and human. All Lord Azphel could do was scoff and feel bitterness towards the other lords that agreed to such foolishness. Lady Siel realizing the mistake of her actions sacrificed herself to revert the complete destruction of Atreia. The Daevas and humans awoke to see their world split in half and separated.

Two of the Empyrean Lords gave their life to prevent Atreia from drifting into space, but the damage was already done. Now the two halves of the planet were split in two and divided by the mystical Abyss. The remaining Empyrean Lords were split into two camps of 5 each; those who believed that the peace treaty had been the right move, and those who did not. Those who believed the peace treaty was a moment of weakness that allowed the Balaur to strike at the Tower became known as the Shedim Lords, and were cast out into the top portion of the newly fractured world.

Feeling bitterness and anger, all five Shedim Lords cursed the Seraphim Lords. Lord Azphel in particular swore retribution and vengeance on Lady Ariel. Amidst rubble and ruin, the Shedim Lords and their Daevas bitterly rebuilt the land, forcing the memories of warmth and light into the past.

Calling this new land Asmodae and adopting the name the Asmodians, this new faction had to adapt to the harsh new climate that they found themselves in. Asmodae received very little sunlight and was covered in the shattered remains of the world, all hope seemed lost. The Asmodians grew pale, gaining red eyes that allowed them to see in the dark, and found their hands and feet becoming into claws and talons. Many people broke down in despair and rage at their transformation. Trying to be optimistic about their transformation, they saw their evolution as a gift from Aion. Never again will the Asmodians be unarmed or blinded by darkness.

Blaming those who proposed peace for their troubles, Asmodae began to rebuild their empire, unaware that their rivals were still alive on the other side of the Abyss. However, not everyone was unaware of the Elyos's existence. Many Daevas caught their lords glaring at the sun-lit shell of Atreia. They knew that the Seraphim Lords were alive and well. Eventually, portals began to spring up into the Abyss, creating a mystical bridge between the two halves of the world. As a result, the Asmodians found themselves face to face with their radiant and unharmed relatives in Elysea. Unleashing their wrath from hundreds of years of agony, the Asmodians and Elyos begun a new age of war and strife. The Elyos will take responsibility for the crimes they've commited.

Difference from The Elyos Edit

Although the Asmodians differ in physical appearance from their Elyos counterparts, their skills and abilities are relatively the same. They both have access to the same classes and only have very minor differences in a handful of spells. The notable exception to this is the Spiritmaster class; as Asmodian Spiritmasters received the combat specialized Magma spirit, while the Elyos received the magically strong yet fragile Tempest spirit. Classes also have some differences in their names of skills, such as

<Shock Arrow I> for the Elyos and

<Shackle Arrow I> for the Asmodian.

Retrieved from "https://aion.fandom.com/wiki/Asmodian?oldid=100131"
Community content is available under CC-BY-SA unless otherwise noted.