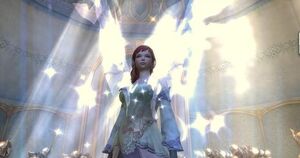 Ascension is the process a Human must undergo to become a Daeva. By ascending, the person gains immortality and a pair of wings which will allow them to fly. Access to the major cities of Pandaemonium and Sanctum will only be granted after ascension.

A human may only ascend if it is willed by Aion. However, some humans believe they can change their destiny and ascend through penance.

At this point, a player must choose what specialized class they would like to become. The choice is not reversible, and cannot be altered once chosen.