Altgard was the second region that Asmodian players would originally explore, and oversaw the progress of players from level 10 up to 20. This somewhat remote yet challenging region was used as a training ground for newly ascended Daevas to hone their skills. Players would, among other activities, run their first instance, be introduced to the flight aspect of the game, and team up to fight their first few elite monsters.

In the 6.0 update Altgard was removed from the game. Beluslan has since taken over Altgard's role.

The region was study in contrasts, from the frozen Altgard Fortress area to the lush fertile fields of the MuMu Farmland. The region was guarded by the Archons under the watchful eyes of <Brigade General SuthranSuthran>. Players could fly in Altgard Fortress, as well as the iconic Heart of Impetusium, which was undergoing major reconstruction. There were many small outposts, but also several larger towns such as Basfelt Village and Altgard Observatory. Along with the varied wildlife in the region, players would confront the Black Claw Tribe and the Lepharist Revolutionaries who sought to disrupt the lives of the local inhabitants. There were no rifts in Altgard. 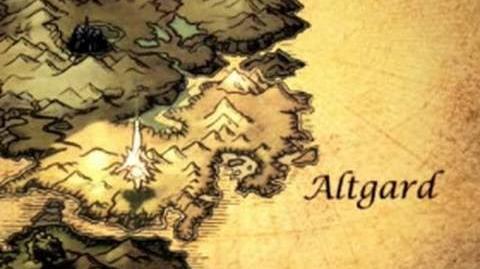 At some point in time, Altgard was Asmodae's center of culture and prosperity. Daevas would come to Impetusium and duel to their heart's content after completing their duties. Humans and spectators would watch in amazement at the clashing Daevas; there was huge fanfare and joy that overfilled the columns and walls of the stadium. After the discovery of the Elyos and the Abyss, Asmodae lost touch with their joy and carefree lifestyle. Daevas now needed to spend every moment of their immortal life fighting for the sake of their land, people, and lords.

Apparently, another shift has happened that disturbed human confidence and self-sustainability. The wildlife has grown ever more vicious and brutal. The once proud hunters of Basfelt Village now cower in fear over the Mosbears. Perhaps the contamination that has spread throughout their water source is the culprit? Apparently, trade has suffered as well, and vicious wildlife threatens the reconstruction of Impetusium.

Through many struggles, the once proud Impetusium is being resurrected to see more glory to be told; however, the Black Claw Mau threaten long-term resettlement. Controlling over half of Altgard, Pandaemonium has other plans to sabotage the ever growing Mau power. The Archons work diligently and hastefully to crumble the Mau territories. Many obstacles still hinder complete Asmodian superiority, but alas, the human race will not stand idly by!

*Note: Teleport and Flight Transporter prices are an approximate 100% value and may fluctuate based on your servers' Influence Ratio.