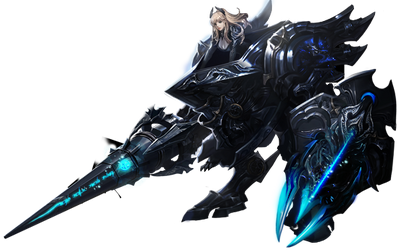 The Aethertech is a technist that can summon and utilize magical mechanical mounts, known as Bastions. With Bastions at their command, the Aethertech can unleash both short-and-long distance attacks and posses massive defences making them an ideal class to add to any raid, PvP or boss battle deep in the world of Atreia. By pulsing aether through these armored suits, the Aethertech can form Gatling guns, rail guns, blades, electric whips, gigantic fists, and even rocket launchers to devastate their opponents.

Magical technology has been at the core of Aion’s story since the beginning and piece by piece, the Daevas have discovered and utilized new and lost technology to create these magnificent war machines. The Hyperion was really the final piece of the missing puzzle.

Lord Beritra inadvertently gave the Daevas this technology by arrogantly thinking the Hyperion would be his to control. Seeing its power first hand, there’s no doubt the Daevas would want to harness that power and turn the tide of the war against the Balaur. So after analyzing the remains of Hyperion in Infinity Shard/Katalamize and the Danuar artifacts ,they came up with an interesting solution.

Aethertechs wear Magic Plate armor as their main set, being the only class which can make use of it. They can also wear Magic Chain, however it is not recommended.