Abyss Points refers to points accumulated by players in a variety of ways, which are used to calculate the players Abyss Rank in the game. There are a number of different ways to gain AP including: 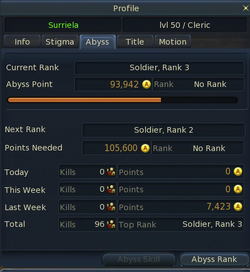 The Abyss Points earned can be viewed in the Abyss Tab of the Profile. Your current Abyss Rank will be displayed along with the required points to achieve the next rank. As well, you will see your weekly total kills and AP as well as an overall total for kills and top Rank. Clicking on the Abyss Rank will list both individual and legion rankings for Asmodians and Elyos.

Retrieved from "https://aion.fandom.com/wiki/Abyss_Point?oldid=101784"
Community content is available under CC-BY-SA unless otherwise noted.